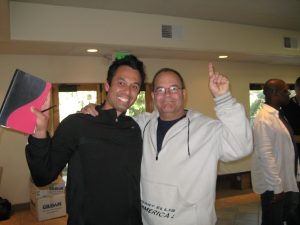 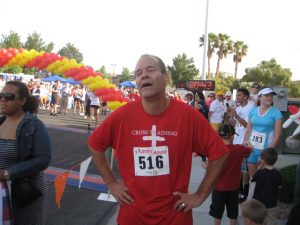 My name is Gregg Seymour. I am a Pastor at a non-denominational Christian fellowship in Henderson Nevada. It was in 2004 that I had become a man in his mid-forties who was on an uphill climb with body weight. My life was one of many years of addiction and body abuse. While I was released from the bondage of those sins in 1996 when I met my Lord and Savior, I still struggled with food issues in my life. My body suffered greatly, as by 2010 I had moved to 245 lbs on my 5’9” small-sized frame.

My weight was something that was really wearing on me. My waist had reached a 44” size, and even that was getting tight. I was at my end emotionally with this, and decided to put my complete effort into a weight loss program. I stuck to the program and within 3 months had dropped close to 50 lbs. I then decided to join a globo-gym around the corner. I had NEVER been in a gym in my life – in fact, I had never truly worked out in my life. After a couple of months I found myself hit with an Inguinal Hernia. This took surgery and put me 2 months out of the gym to recover from. It was then I realized – “I DON’T HAVE A CLUE ON HOW TO DO FITNESS”.

It was during this time of break that I was talking to a member of our congregation named Derek DelRosario. I had known Derek informally for over a year or so, but never spoke with him about fitness. He told me briefly about his fitness training background and said that he would love to give me guidance into a strategized program. Through his training experience I went from zero to running my first marathon in one year’s time. Through the program set forth by Derek, I was able to drop down to a weight of 160 lbs which equated to a 14” reduction in waist size. It was towards the end of 2011 that Derek informed me that beginning in 2012, the training “was not going to be harder, but different”. He told me to think about one word – “CrossFit”. I had no idea what he was talking about, but would soon find out. We joined a local CrossFit affiliate and started training. While it was on one hand the hardest thing I’d ever done, it became quickly apparent that it was also one of the most rewarding things I’d ever done. At 51 years old, Derek led me to a program that would change my entire perception of what my limitations were. I am now completely sold-out to the CrossFit training philosophy, and see the overwhelming benefits of this regimen.

Derek shared with me his vision of opening a CF box someday that would focus not just on the physical side of fitness, but on the spiritual as well. That vision immediately excited me. As a distance runner my passion is endurance, and based on that I am also excited to see how the CrossFit Endurance program and philosophy will be utilized at this box. I have been thoroughly blessed by Derek’s vast knowledge and experience in the area of fitness training. His overall expertise in exercise and nutrition has proven invaluable in my quest into endurance athletics. I endorse Derek and CrossFit 2 Serve to anyone desiring to improve overall quality of life.